The AT&T-Time Warner Merger: A Match Built on Hope

Is AT&T’s $85 billion bid for Time Warner the triumph of hope over experience?

It is certainly true that the last two mega-mergers involving Time Warner fell far short of their promise. After the 1989 marriage of Time Inc. and Warner Communications, for instance, it took seven years for investors to see any real gains in the combined companies’ stock.

But even that painful deal paled in comparison to the 2001 merger of AOL and Time Warner. That was the worst combination in corporate history, at least until 2008, when Bank of America bought Countrywide Financial, the toxic mortgage lender.

This time it’s different, contends Randall L. Stephenson, AT&T’s chairman and chief executive. He called the merger “a perfect match of two companies with complementary strengths who can bring a fresh approach to how the media and communications industry works for customers, content creators, distributors and advertisers.”

There’s something for all investors in this corporate marriage, AT&T says: Those seeking earnings growth will benefit as well as investors on the hunt for income. For one thing, the company expects the combination to begin adding to earnings the year after it closes - a quick turnaround by traditional standards. And it also says the takeover will improve its so-called dividend coverage. That’s the measure of how much excess cash AT&T has to cover its 5.3 percent dividend.

This holds especially true for telecommunications shareholders. “The telecom industry has many examples of deals which failed to reach their potential, or destroyed significant value, including investments in content,” Simon Flannery, an industry analyst at Morgan Stanley, wrote in a note published on Monday. After one year, his research shows, the top quartile of telecom deals generated positive returns of around 6 percent; the bottom quartile, meanwhile, showed a roughly 25 percent loss in value.
I wanted to ask Mr. Flannery for more details, but a Morgan Stanley spokeswoman said he was restricted from commenting because the firm is an adviser on the AT&T-Time Warner deal. 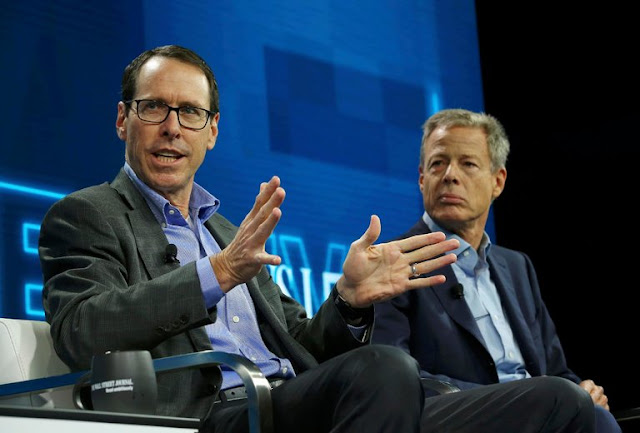 AT&T shareholders would surely welcome a lift in earnings if the Time Warner deal were to deliver one. A more immediate concern for investors may be what the merger will mean to the future of AT&T’s beloved dividend. These payouts have been the main reason to own what has otherwise been a lackluster stock.

AT&T’s dividend of 5.3 percent per year, well above the 3.6 percent paid by its peers, according to Bloomberg, has been a lure for investors. It also may have lulled them into complacency about the company’s operations over the years.

During the last five years, AT&T shares have gained 25 percent versus a 67 percent rise in the Standard & Poor’s 500-stock index, not counting dividends. The company’s operational performance has also disappointed. In 2015, AT&T’s net income was 27 percent below the level of two years earlier. Revenue growth is one area where AT&T has outpaced its peers, but much of the 11 percent increase in 2015 from the year before was attributable to AT&T’s purchase of DirecTV and Mexican wireless operations.

Some analysts think the deal for Time Warner could put a dent in the rich AT&T dividend. “Investors should be cautious because in order to maintain the dividend, AT&T has to take on a huge amount of debt,” said Ginette Rowe Beecherl, an analyst at Greenbrier Partners, a money management firm in Dallas. “To the extent that their assets decline as their technology is supplanted, will they really be able to support such a high dividend?”

Brad Burns, an AT&T spokesman, said the company was confident in its ability not only to sustain the dividend, but also to raise it. He said free cash flow generated by Time Warner would help the combined companies bring down debt ratios by the end of the first year after the deal closes. And four years after, the company will be back to its historical target debt range, he said.

“That’s why on Saturday, we announced we’ll increase our quarterly dividend for the 33rd straight year,” Mr. Burns added.
Among the 500 companies in the S.&P. index, AT&T is the fourth-largest dividend payer in aggregate dollars, said Howard Silverblatt, senior index analyst at S&P Global. This year, AT&T is expected to pay some $12 billion in dividends. Only Exxon Mobil, Apple and Microsoft pay more.

In recent years, AT&T’s dividend payouts have accounted for 60 to 70 percent of the company’s free cash flow. This compares with a 40 percent average dividend payout ratio among S.&P. 500 companies currently.

To conclude the merger, AT&T’s debt will rise to over $190 billion, from about $126 billion, according to Mr. Flannery at Morgan Stanley. He wrote that this debt load could put the dividend at risk if AT&T’s business deteriorated or its capital expenditures and interest costs rose.

Shareholders are not the only ones benefiting from AT&T’s sumptuous dividend. Some of the incentive pay received each year by Mr. Stephenson and his top lieutenants is tied to the total shareholder return of the company’s stock. AT&T’s hefty dividend makes a big contribution to that total return measure.

Last year, Mr. Stephenson received a compensation package of $25 million, the company’s proxy filing shows. He was the 38th-highest-paid chief executive in 2015, according to Equilar, a compensation research firm in Redwood City, Calif.

“AT&T is not a technology company, not a services company and not a utility company - it’s a dividend-paying company.” Ms. Beecherl, the Greenbrier analyst, said. “if it pulls off its latest gamble to remain relevant by acquiring Time Warner, investors will be left with a company with one of the highest levels of debt in the world while its technology is supplanted, and its C.E.O. receives $25 million a year.”

Mr. Stephenson may well be right about the promise of the Time Warner deal. But judging by the 5 percent loss in AT&T shares since the deal was announced, it seems that quite a few of his shareholders aren’t sticking around to find out.